This week, our Project 52 prompt was House On Fire. The idea was to photograph the objects you would grab if your house was on fire. If all your family & pets were safe, what things would you want to save from the fire?

One day last year, our weatherman was predicting strong storms & a high likelihood of tornadoes with such sincerity that I pulled out a suitcase & threw in a few things, just in case. Important papers, photos, all the practical things, plus a few sentimental things I wouldn’t want to lose. A few hours later, I found myself running across our yard through pelting hail while tornado sirens blared, hurrying the kids toward our neighbor’s basement & lugging that suitcase with us. Luckily, that tornado skipped through the county doing very little damage, & I was able to unpack that suitcase & put all our stuff away again.

But if the house was on fire? There wouldn’t be time to run around gathering important stuff. I would have to have faith in our fire safe to protect our important documents & let everything else go. But if I had a few moments, these are the two things I would save… 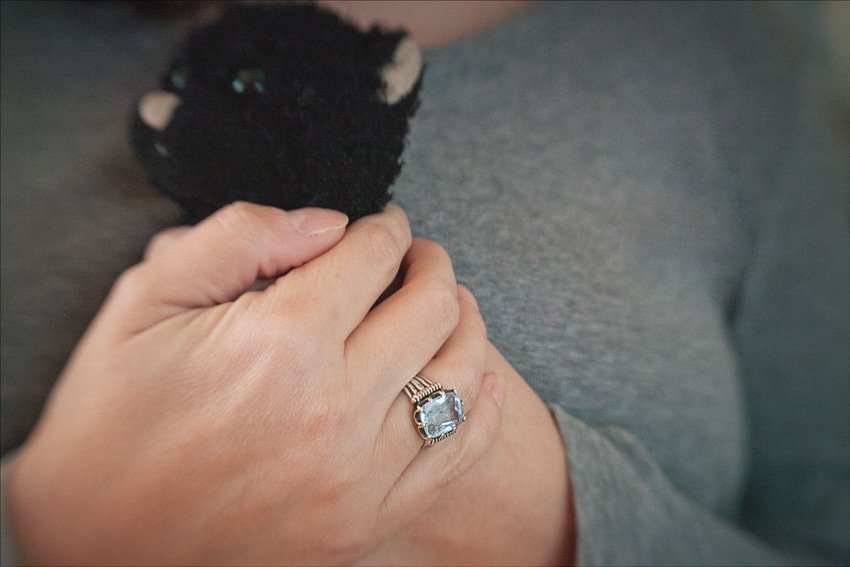 The ring is one that my grandfather bought in Italy during World War II. He bought it for his mother, & it later passed to his wife, my grandmother. Because the jeweler was afraid sizing would crack the stone, the ring was packed away. When I was a little girl, my grandfather took it out & showed it to me. He told me its story, &  that someday it would be my mom’s, then mine. I thought it was the most beautiful thing I’d ever seen, but even as a child, I remember being struck by the awful price to be paid before it would belong to me.

He passed away before my wedding, but that ring was my something old, something borrowed, & something blue. My little bit of him there with me that day. My grandmother passed it on to my mom when she realized she wasn’t going to be able to live on her own any more, & this year, when I turned 40, that ring was my mom’s birthday gift to me. Someday, it will be my daughter’s, a gift from a great-great-grandmother she never met, her Momae, her Nana, & me.

The second thing I would grab if I had time is Sammy. I posted once before about how we lost Sammy, & I don’t think I could handle losing him again. I think there is a little part of me that thinks of Sammy as real and couldn’t bear to lose him in a fire.

I shot this at a high ISO with my Lensbaby Spark, to give it a dreamy (or maybe nightmarish considering the premise) quality.

Next up in the blog circle is Lauren Penland. Go show her some love!

Gallery image with caption: May 2019 Wallpapers

I'm Amanda - mystery writer, bookworm, photographer, & mom of two. When I'm not homeschooling my kids, the hacker & the ballerina, or plotting how to get away with murder, I like to hang out here & talk mysteries, writing, & photography. I'm so glad you stopped by!

Want to stay informed
about new releases,
giveaways, & more? Sign up
to receive the Quill & Glass
newsletter. You'll get all the
latest news delivered
straight to your inbox!

Want to Get the Latest?

Want to stay informed about new releases, giveaways, & more?
Sign up to receive the Quill & Glass newsletter. You'll get all the latest news delivered straight to your inbox!

Jumping on the Top 9 bandwagon. No coincidence a t

The dog of mischief has hung his stocking by the c

What does a mystery writer put on the Christmas tr

Finally (I think) over this flu or whatever I’ve

I’m a day late posting this, but Happy NaNoWriMo